Messi played in Barcelona’s junior Infantil B and Cadete B & A teams from 2000 to 2003 (scoring 37 goals in 30 matches in Cadete A). Season 2003–04 saw him on a record five different teams: He started one match in Juvenil B (one goal) and got promoted to Juvenil A (14 matches, 21 goals). Later he debuted for FC Barcelona C team (Tercera División) on 29 November 2003 and for FC Barcelona B (Segunda División B) on 6 March 2004. He played for both teams during the season (eight matches, five goals and five games, zero goals, respectively). Even before these two debuts, Messi made his official debut for the first-team on 16 November 2003 aged 16 years and 145 days, in a friendly match against Porto.
Less than a year after his start, Frank Rijkaard gave him his league debut against RCD Espanyol on 16 October 2004 (at 17 years and 114 days), becoming the third-youngest player ever to play for Barcelona and youngest club player who played in La Liga, which would be broken by Bojan Krkić in September 2007. When he scored his first senior goal for the club against Albacete Balompié on 1 May 2005, Messi was 17 years, ten months and seven days old, becoming the youngest to ever score in a La Liga game for Barcelona until it was again broken by Bojan Krkić in 2007, scoring from a Messi assist. Messi said about his ex-coach Rijkaard: “I’ll never forget the fact that he launched my career, that he had confidence in me while I was only sixteen or seventeen.” During the season, Messi played also in Barcelona B (Segunda División B) scoring 6 goals in 17 matches.

Lionel Andrés Messi (Spanish pronunciation: [ljoˈnel anˈdɾes ˈmesi]; born 24 June 1987) is an Argentine footballer who currently plays for FC Barcelona and the Argentina national team as a forward or winger. He also holds Spanish citizenship, which makes him eligible as a EU player. Considered one of the best football players of his generation and frequently cited as the world’s best contemporary player, Messi received several Ballon d’Or and FIFA World Player of the Year nominations by the age of 21 and won both by the age of 22. His playing style and ability have drawn comparisons to Diego Maradona, who himself declared Messi his “successor”.
Messi began playing football at a young age and his potential was quickly identified by Barcelona. He left Rosario-based Newell’s Old Boys’s youth team in 2000 and moved with his family to Europe, as Barcelona offered treatment for his growth hormone deficiency. Making his debut in the 2004–05 season, he broke his team record for the youngest footballer to score a league goal. Major honours soon followed as Barcelona won La Liga in Messi’s debut season, and won a double of the league and Champions League in 2006. His breakthrough season was in the 2006–07 season; he became a first team regular, scoring a hat-trick in El Clásico and finishing with 14 goals in 26 league games. Perhaps his most successful season was the 2008–09 season, in which Messi scored 38 goals to play an integral part in a treble-winning campaign. In the following 2009–10 campaign, Messi scored 47 goals in all competitions, equalling Ronaldo’s record total for Barcelona.
Messi was the top scorer of the 2005 FIFA World Youth Championship with six goals, including two in the final game. Shortly thereafter, he became an established member of Argentina’s senior international team. In 2006, he became the youngest Argentine to play in the FIFA World Cup and he won a runners-up medal at the Copa América tournament the following year. In 2008, in Beijing, he won his first international honour, an Olympic gold medal, with the Argentina Olympic football team. 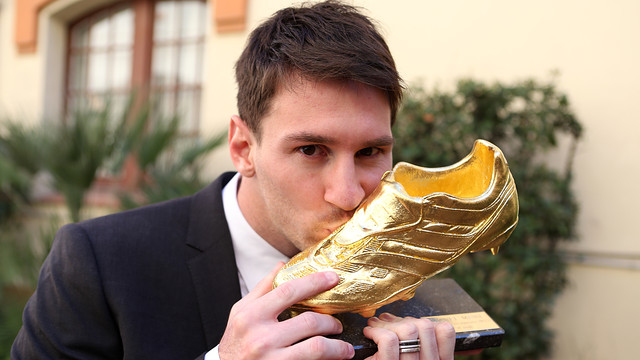